A water hammer arrestor is a chamber filled with air designed to damper the convulsive effects of water hammer on a plumbing system. This requires that there be two distinct and separate pressure systems in a total system, that of air and that of water. There are two major types of water hammer arrestors, those fitted with pistons and those not fitted with pistons. Among the various means to dampen the pressure spike of water hammer, those varieties fitted with a piston are the most effective. Although there are many methods to arrest water hammer, it has been noted that a simple air chamber to absorb the increase of pressure caused by water hammer is ineffective. This is simply because the air molecules in the air chamber, though normally separate from the water, mix with the water when dampening the pressure spike, and shortly, the chamber becomes waterlogged, and does nearly nothing that it was supposed to do. It is a fortunate occurrence that this type of arrestor has become obsolete. 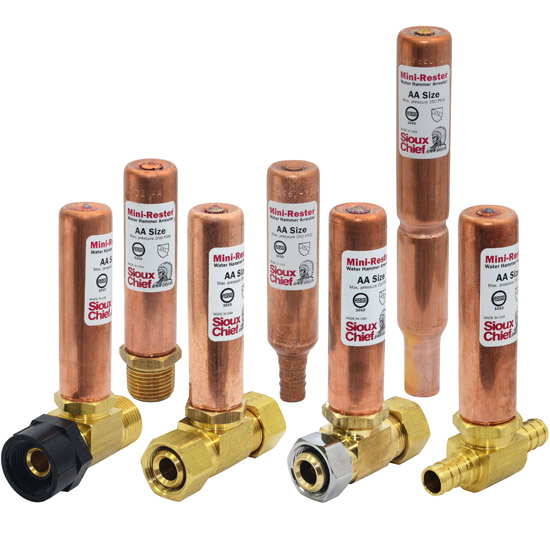 The piston arrestor, however, is manufactured to prevent this flaw. Placed near a quick-closing valve, of a dishwasher or ice maker, for instance, and fitted with a piston that divides a pocket of air from the water in the pipe line, the piston arrestor reacts to the increase in pressure resulting from the valve that has quickly closed by pumping up and down, dampening the repercussive effects of water hammer on the plumbing system. It effectively prevents the degeneration of plumbing, or even burst pipes or valves.

This piston is fitted with an O-ring, which creates a seal between air and water in order to prevent the air from escaping into water, and the water from mixing with the air, in the chamber. Thus, the pressurized air pocket is not as susceptible to being submerged in water as it would be without a seal, and will not easily lose its pressure difference, because of the seal this O-ring creates, and so lasts much longer and works effectively.

It functions in this way: as pressure increases, the piston works up and down, by means of the pressure and counter pressure of the water and the air. Because of these contrary forces, water hammer is diminished in a less drastic and less damaging way than without the arrestor, the forces slowly acting upon one another and neutralizing one another.

Piston arrestors vary in type by the size of a fitting, the amount of pressure exerted on the line, among other things. An appropriate selection must take these variables into consideration.